As a person who makes his living analyzing hospital operations data and generating forecasts of Staff needed, I’ve been asked what I think of the COVID-19 pandemic. Every day there is a flood of articles, papers, blogs & op-eds on the topic, simply because it is the dominant topic in the world right now (and rightly so.) So, I’ve resisted chiming in (until now,) especially because I am not an epidemiologist. However, I’ve decided that I can bring some clarity to the numbers themselves, and try to explain what they can, and can’t tell us aboutCOVID-19.  Today I will talk about the mortality numbers. The most confusing COVID-19 mortality question is: What is the Mortality Rate of COVID-19?

Objectively, this Mortality Ratio tells us only the ratio of reported deaths to reported cases; it does not necessarily match up well with Mortality Rate, but imperfect as it is, it is the best objective measure available. So how useful is it? Figure 1 shows the Mortality Ratios for the top 12 countries by case volume right now. 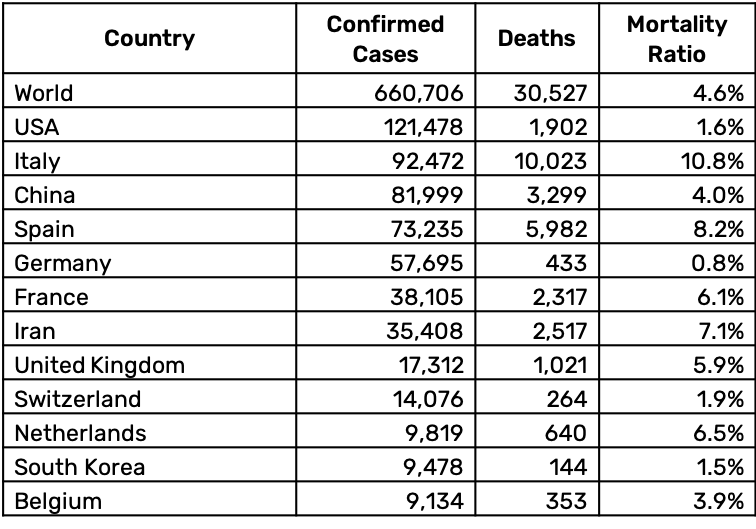 Why are there dramatic difference between the countries’ Mortality Ratios? Some comes down to testing: Germany and South Korea have done extensive population testing which increases the Confirmed Cases, and Italy has done extensive post-mortem testing which increases attributed Deaths.  Another issue is the population characteristics. Italy has the highest average age in Europe, a high incidence of smoking, and a culture of personal contact in greetings (hugs, kisses, etc.) So, the initial rate of spread in Italy was faster, and those who contracted it were at a higher risk of developing severe symptoms. Certainly, another factor is the capacity of the health care system. Italy has at least 10 times the cases of similarly sized South Korea (likely even more due to the disparity in population testing), which has caused needed hospitalizations to exceed the Italian healthcare capacity, resulting in additional deaths.

Speaking of population characteristics, it is clear that mortality is heavily impacted by age, sex, and underlying cardiopulmonary conditions. Men are 50% more likely to die than women.  For age, over 70 seems to double mortality, and over 80 seems to double it again. Of all deaths, 75% had cardiovascular or respiratory issues. So, if you are a non-smoker female under 60 with no history of heart or lung issues, are you in the clear? Not really. Your risk of dying from contracting COVID-19 is still many multiples higher than the seasonal flu. And for those in the highest risk categories (older males with serious health issues), the risk of death is possibly as high as 1 in 5.

You may think that the US is ‘doing fine’ with a current Mortality Ratio of 1.6%, but that would be wrong.  First, that ratio is rising; it has risen from 1.2% to 1.6% in the last week. Second, the level of testing in the US is still low for both population and post-mortem testing.  Third, the health care system is just now starting to reach capacity in places like New York. Finally, there is a ‘lag’ in Deaths versus Cases by several days; if you use an average ‘5-day lag’ between diagnosis and death for fatalities, the US Mortality Ratio is 4.4% (44 deaths per 1,000 cases) which is more in alignment with the rest of the world, and would suggest that the number of deaths in five days will be about 5,000.  As the number of cases rise in the next few months, I expect the US Mortality Ratio will also rise.

So, can we use the Mortality Ratio a proxy for Mortality Rate? Mortality Rate is a technical metric needed to perform Epidemiology studies; beyond that, it really doesn’t help us understand the deadliness of an epidemic any more than a good proxy like Mortality Ratio.  I would purport that the Mortality Ratio is good enough of us to understand how deadly COVID-19 is, and how many lives can be saved by ‘flattening the curve’ to buy us some time until improved treatments and / or a vaccine become widely available (hint: that won’t happen for a while.)  in my next blog, I will discuss what I expect for the progression of COVID-19, what could ‘flatten the curve’, and what that impact would be.

Take the guesswork out of staffing